There is an important difference between the perception that we have about the quality of a product and its real qualities. The continuous messages that come to us from the outside, and from which we are flooded today, are often able to distort reality and negatively affecting our choices. Political choices, both internationally and nationally, are increasingly influenced by large international groups which hold ever greater power. Consumers are not only often kept in the dark about the real characteristics, quality and origin of food products, but, even more serious, they are also easily misled and directed in opposite directions to the real ones. This is the case of the olive oil sector where distorted information that has been passed over time has completely distorted and degraded a sector of absolute value of the Italian economy. What we have witnessed from the post-war period to today is a progressive, planned and scientific flattening of the taste of olive oil, carried out by large corporate groups that carry out mass production and that, ever less, are be able to persue real standards of quality of the product . At best, these companies offer low-quality blends of extra virgin olive oils coming from different countries that often have a very flat taste. Just the opposite of that should represent an extra virgin olive oil, where the characteristics of the product should come out in a net way. Not to mention the large number of sophistications present in the sector. Today, the paradox which I experience on my skin as a small olive oil producer, is that often the consumer is not able to know the good product from the bad. I happen to hear people who prefer “delicate and flat tastes” of products, in which the positive and healthy characteristics are almost completely lost, compared to tastes named as “too strong” where instead you can hear the sensations of bitter and spicy, synonyms of good quality. Considering the huge economic interests at stake, all this was made possible by world policies that were compliant to large international groups, to which all countries, starting from Italy, bowed without protest. Today Italy, after Spain, is the second largest olive oil producer in the world, but at the same time it is the largest importer from abroad. We are really so sure that come really from Italy the so much advertised and renowned olive oil made in Italy ? 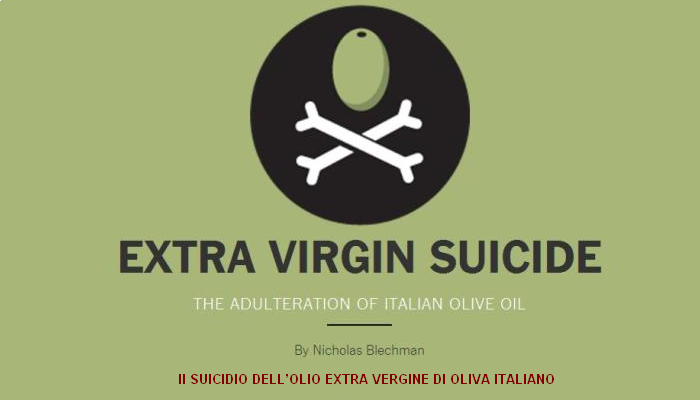 In January 2014 in the United States, a cartoon about olive oil was published in the New York Times that caused a great deal of fuss in public opinion. The comic is called “The Suicide of Olive Oil” and was proposed by an American journalist, Nicholas Blechman, who has taken numerous documents and complaints even from some Italian colleagues who have tried to declare that in this sector somethink does not work. In summary, the cartoon speaks of an Italian product of absolute excellence as the extra virgin olive oil which over the years has been degraded to a medium/scarce product and sold at very low prices in department stores all over the world. In summary an Italian product of highest quality that committed suicide !!!! As reiterated by many honest producers and by many television reports, it is impossible to produce a good quality extra virgin olive oil and then market it below the production costs. There is something wrong and no one is doing anything to solve the problem. Despite the proclamations, politics often goes in the wrong direction and benefits the strong powers and mass productions to the detriment of small businesses that find enormous obstacles only to proponing to the markets product of real quality.

Fortunately something is changing and also thanks to a greater possibility of obtaining information, people are beginning to open their eyes.